A grim vignette of commercial operators’ attitudes to road laws and other road users.

Few people will have failed to notice the recent surge in warning stickers on the rear of commercial vehicles, many imploring “Cyclists: stay back”. London in particular has seen quite a debate around them: first there was the anger at them, then TfL refused to do anything, then they said they’d go, and the pragmatic conclusion was that they’d be replaced with “Blind spot: take care” stickers.

But not only have these stickers graced the back ends of buses and HGVs; they now also frequently show up on panel vans and car-based vans, few if any of which have blind spots at their sides, let alone any that would be large enough to lose a cyclist in.

So why the stickers?

Well, if you were wondering, yesterday Europcar appeared to explain.

Not aware of doors

Europcar were asked directly why these stickers were on one of their vehicles (which appears to be a Peugeot Partner, a van no larger than a normal family car). 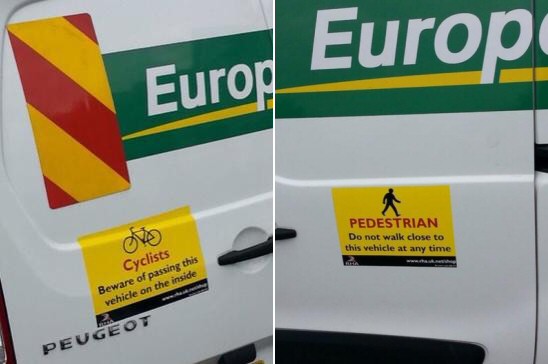 Their response? (Edit: since this post went online, the tweet has been deleted. Screen grab to the rescue…) 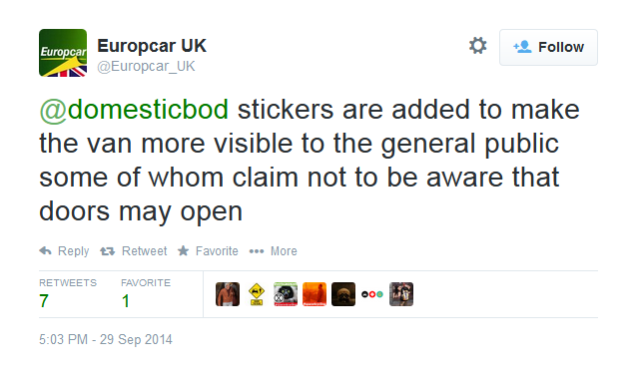 So, for Europcar at least, it’s not so much about blind spots, but about people being in the way of their doors. People who “claim not to be aware that doors may open”. Wow. That’s a ballsy remark.

Not aware of laws

Unfortunately for Europcar, the law is crystal clear about who is responsible when it comes to opening the doors of a vehicle. Section 105 of The Road Vehicles (Construction and Use) Regulations 1986 (summarised in Rule 239 of The Highway Code) states:

No person shall open, or cause or permit to be opened, any door of a vehicle on a road so as to injure or endanger any person.

This isn’t a woolly matter of what constitutes the expected behaviour of a “careful and competent driver” as required by the test for careless or dangerous driving. This is a plain and simple directive. Open a vehicle door in such a way as to endanger someone and you are guilty of an offence.

Europcar absolutely don’t have the right to absolve any users of their vehicles from blame in such an instance; whether they are Europcar’s employees or their customers.

The stickers are nothing more than an attempt to undermine a very clear law, and this they cannot achieve.

What they achieve is the undoing of a business’s reputation, because they do nothing more than portray it as attempting to wriggle out of laws designed specifically to prevent people from coming to physical harm. This is somewhat amplified by their tweet explaining this weaseling in a particularly snide manner, suggesting that their contempt for others matches their  contempt for the law.

And it’s amplified further by – staggeringly, and quite unusually – not just aiming the contempt at people on bikes but also people on foot. Seriously? “Do not walk close to a Peugeot Partner at any time?”

Let’s hope Europcar see sense by removing these stickers, having a think about their communication skills on social media, and – last but by no means least – understanding the law.

Of course, despite the statute being crystal clear on whose responsibility it is, if opening a vehicle’s door does result in tragic consequences the legal system will struggle to figure out what to charge you with and fail to convict you.

So, really, the law has as much contempt for itself as Europcar does.

7 thoughts on “Of Stickers and Snideness”